“What are we doing out here in the freezing cold?” asked my deputy as we got close to the edge of The Serpentine Lake in the middle of Hyde Park in London on a cold, blustery September morning.  As Broadcast Managers for the London 2012 Olympic & Paralympic Summer Games Organising Committee it was our job to work with the International Olympic Committee’s broadcast division, Olympic Broadcast Services (OBS) on delivering operational plans to ensure that for all of the Olympic & Paralympic venues we managed OBS’s broadcast plans worked in coordination with municipalities and private industry in addressing their needs.  Things like thousands upon thousands of meters of cabling, cabling containment, camera placements, camera platforms, RF antennas, compound build-outs, and many more broadcast needs too long to mention here.

The reason for her and me to be out there on that cold day was to conduct an experiment of sorts.  But, I digress for a moment to go back a month prior.  In a meeting with OBS regarding the Triathlon & Marathon Swim venue on The Serpentine Lake in Hyde Park they indicated that to get the overhead video shots of the athletes swimming in the lake and riding the bike portion of the Triathlon they needed to have a cable camera in the air that spanned an almost 1/2 mile (804 m) length over the lake anchored on each end by two huge cranes.  These cranes would have a height of almost 100 metres and the two guide wires (actually thin ropes) would stretch between the two cranes.  The camera was a buggy on wheels of sorts that would run along these guide wires to give amazing video footage of the competition.  This is a schematic of what the cable cam set-up was planned for:

Meetings began with the two Royal Park authorities that controlled each side of the lake for this set-up.  Many, many back-and-forth discussions took place between the Royal Parks, the Hyde Park Venue Team, Broadcast, and OBS about the necessary requirements needed to make this camera set-up become a reality.  Then, a request was asked by the Royal Parks.  After viewing the set-up shown above they asked about the potential bird strikes that could take place (meaning with these new ropes stretched across the lake migrating birds that use the lake may inadvertently fly into the ropes and be injured and/or killed). We were then reminded that swimming on The Serpentine Lake were swans, not ordinary swans mind you, but the Queen of England’s swans (note, all swans in the UK are considered Royal fowl) and there was a law on the books from the late 1500s that stated if these swans were harmed in any way there was a one-year prison sentence that came with it (true fact but the laws have changed a bit since the 1500s). With that said, the Royal Parks insisted that OBS provide to them a bird mitigation study that demonstrated how cablecam usage during previous Olympic Games lead to no birds being injured or killed.  We didn’t see this one coming.

After sitting with our friends at OBS we formulated a plan for this study.  They would go back and speak with their contractors from previous Games to see if there were any bird strikes or deaths and we would do some research from our end.  Fast forward back to the cold, September day with my deputy at The Serpentine Lake.  As part of my research into “Air Speeds of Migrating Birds” I came across formulas that took into account things like ‘Variation of the power curve with body size’ and ‘Triangle of Velocities’ of swans in flight.  I felt like I was doing research for a David Attenborough documentary.  Then, this formula caught my attention:

Dense stuff, I know, but I figured that these Bird Avionics formulas would help support our OBS Royal Parks document.  However, I noticed that the one piece of data we didn’t have was the lift angle of a swan taking off for flight.  To help with this data I went ‘old school’ and walked to the local office products store and purchased a 50 pence clear protractor like we all had in middle school.  Down at the lake, my deputy and I tried in vain to get these tourist fed, overweight swans to fly in the air so that we could get their angle of flight data.  People must have thought we lost our marbles talking to swans.  Eventually, as the cold set in, we finally got this photo to support my flight angle formula theory.  A 10-degree flight angle!

With our non-scientific data we showed that for a Serpentine Lake swan to fly to the height of around 100 metres, where the guide ropes for the cablecam were located, the swan would need a take-off distance of half the length of the runway at Heathrow Airport.  We went to our London 2012 Sustainability Department and spoke to them about our bird avionics research.  After a couple of wide smiles, they said, “You can’t use this data for your study submission to the Royal Parks.”  I asked, “Why?”  The laughing response was “Because you’re not a scientist!!”  LOL.  Point taken.

A month later, we submitted OBS’ four-page response titled ‘Bird Avoidance & Cablecam Systems’ that demonstrated there we no bird strikes or deaths from any cablecam usage at previous Games.  The Royal Parks approved the build-out of the cablecam, OBS produced some outstanding coverage with the video shots from the cablecam, and, most importantly, no Royal fowl were injured or killed during the Games.

Lessons Learned:  First, in the events business, just when you think you’ve seen it, done it, or experienced it, you haven’t.  Writing a “Bird Avoidance & Cablecam Systems’ study was an unexpected first, for all of us.  But, we now have that on file for when it may be needed in the future.  Second, you have to work hard to help people understand what you and your client’s needs are and that you have solid plans in place to back them up. If you have solid plans, people will go to bat for you and get you what you need. The Hyde Park Venue Team for Triathlon/Marathon Swim, our Sustainability team, the Royal Parks managers, and my Broadcast directors were true professionals. Their patience in dealing with many, many changes, and challenges made all of the difference in the broadcast coverage you all watched on TV. And, on a final note, we all realized that the Royal fowl on The Serpentine Lake in Hyde Park live a good life! 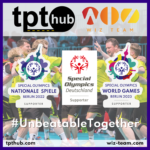